We know that there are many different cryptocurrencies in the market. But one of them is called Magic Internet Money (MIM). If you were thinking about Bitcoin (BTC), then you were wrong. There is another digital currency with this name. We are talking about Abracadabra Money, a decentralized finance platform that allows users to produce magic internet money.

What is Magic Internet Money (MIM)?

Some of the crypto assets that users can provide collateral with include yvYFI, yvUSDT, yvUSDC, xSUSHI and many others. This is not the first time that we see a project such as Magic Internet Money (Abracadabra Money) expand in the cryptocurrency market.

Users would then be able to borrow MIM tokens that work as a stablecoin. Stablecoins are digital currencies that do not have a fluctuating value. That means that if you hold a stablecoin, the price would usually be linked to a fiat currency such as the US dollar or the Euro, among others.

It is worth taking into consideration that Abracadabra Money is one of the most advanced decentralized finance platforms in the market. Therefore, the goal is to offer better liquidity in order to make trading and swapping easier for investors.

Let’s now get into the details of the farming, borrowing and staking solutions offered by a crypto platform that offers Magic Internet Money to its users.

Abracadabra Money works with the SPELL token. This token aims at creating the necessary incentives for liquidity providers to engage in the platform. This is a great way for people to deposit funds and start earning rewards with the SPELL token. However, there are still some things that we should take into consideration about farming.

As a liquidity provider, you can earn SPELL tokens. And that’s definitely positive. But relying always on the same token to get rewarded could create a situation in which you would not be able to earn the same rewards as in the past. For example, with the growth and expansion of the whole DeFi market, other platforms would appear with higher rewards for users with more valuable tokens.

This happens because new SPELL tokens have to be created in order to keep the incentives going. However, the creation of new SPELL tokens devalues the token, as it happened already with many other cryptocurrency trading platforms (in the DeFi market) in the past.

Hence, users should know that they are using a platform that would reduce the incentives over time for investors if they want to provide liquidity. It is also worth taking into account that this project is also working with Olympus DAO. This allows it to take control of its liquidity.

Through Protocol-owned liquidity (POL), Abracadabra can focus on delivering better products. Thanks to the liquidity shared by POL, Abracadabra Money is able to offer enhanced solutions and services to users on the platform.

We also need to talk about borrowing using Abracadabra Money. This works by depositing interest-bearing tokens and getting the Magic Internet Money virtual currency (stablecoin). This stablecoin lets you buy other virtual currencies such as USDT or USDC, among others. You would be able to use MIM where it is accepted.

This platform is quite similar to other cryptocurrency DeFi protocols in the market. Users can easily deposit funds as collateral and get Magic Internet Money tokens. Rather than using just one lending platform, the team behind this project decided to use different protocols in order to expand liquidity and options for users. This is also in line with the Protocol-owned liquidity (POL) implementation that we discussed in the previous section.

When it comes to staking on top of the Abracadabra Money platform, we should talk about the SPELL token. Users that stake this token will get rewarded with the sSPELL virtual currency. This is one of the ways in which investors can earn rewards using this DeFi protocol.

Moreover, you will be able to also collect fees with the sPELL tokens. These fees will be paid to you and will be rewarded continuously. However, take into consideration that the lock on sSPELL would last for 24 hours after you start staking your SPELL tokens.

Other DeFi protocols offer similar staking solutions. This helps the project reduce the SPELL in circulation – at least momentaneously. Let’s not forget that new SPELL tokens are created on a regular basis to incentivize users on this platform to provide liquidity. That creates a situation in which there is a constant selling pressure on SPELL tokens.

This has already happened to other protocols in the past. Abracadabra Money should be able to find a balance between incentivization and SPELL issuance. The larger the incentives to provide liquidity, the better the services would be (higher liquidity for investors) but it would devalue the token faster.

Instead, a slower new issuance of SPELL tokens would create a situation in which users would prefer to provide liquidity to other platforms rather than to Abracadabra Money. In this situation, the devaluation of the SPELL token would not be as fast as in the previous case.

We have talked about Magic Internet Money and how this virtual currency is considered to be a stablecoin. Indeed, we can see that the coin has been fluctuating close to $1 since it was released to the market.

Nevertheless, it is worth pointing out that there has been a short period of time in which the coin fell by over 2%. In August 2021, the token reached a price per coin of $0.975. This shows that there was a short-term selling pressure that affected the price of Magic Internet Money. 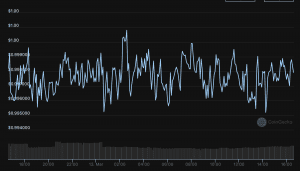 But that’s not all. After this situation, the digital currency started moving higher. We saw an appreciation of over 1% in late 2021, pushing the price of this virtual currency to $1.01. These are relatively large price fluctuations for a stablecoin. However, it is possible to understand that this could have happened due to the fact that the coin has not yet enough liquidity to keep its price stable as other already established virtual currencies (stablecoins) in the market.

That being said, the price of the virtual currency (Magic Internet Money) remained relatively stable over the last few months and since it was released to the market. It would be interesting to see how its price will evolve in the coming months and whether there will be decoupling from its peg or not.

As we mentioned before, the SPELL token plays a very important role in Abracadabra Money. This is the native token to the Abracadabra Money ecosystem. The goal behind this token is to offer better governance decisions, collect fees and incentivize liquidity through yield farming and other solutions.

SPELL works mostly as a traditional DeFi token that runs on the Abracadabra Money protocol. Moreover, it also interacts with the Magic Internet Money (MIM) ecosystem. Thanks to its governance solutions, the SPELL token makes it easier for users to vote on different governance aspects. In this way, investors and SPELL holders are able to shape the future of the platform by participating in direct initiatives to improve the protocol.

Additionally, the SPELL token would then collect Abracadabra Money fees. This allows the platform to compound rewards to users through the sSPELL token. It is worth taking into consideration that users should be able to lock their sSPELL tokens as well as their SPELL coins to get rewarded.

When it comes to SPELL token, we have seen that the coin has massively expanded during the last months of 2021. The coin was released in 2021 and until October it remained relatively stable. Then, the coin started to move higher and it reached an all-time high of $0.034 in early November 2021. At that time, Bitcoin and other virtual currencies were also reaching their all-time highs, hence, we see a strong correlation here with the cryptocurrency market.

But things started to move downwards in November 2021. Indeed, the coin entered a bear market that pushed the coin below $0.01. Then, in early 2022 there was a recovery to $0.0026 that was not enough for the digital currency to continue moving higher. Then, a second sell-off started.

We have seen SPELL fall below $0.004 per coin in recent days. This shows the problem that many decentralized finance protocols such as Abracadabra Money are currently facing with the incentivization model that they have in place. Over incentivizing liquidity creates a situation in which the coin losses value very fast.

The positive thing of properly incentivizing a protocol is related to the fact that users can easily provide liquidity and feel they are rewarded for what they do.

Now, if the project decides to reduce the incentives to liquidity providers, the protocol risks losing a large number of people that have been providing liquidity. Despite the fact that there will be a lower issuance of SPELL tokens, the project would have large failures when it comes to liquidity, making the whole protocol useless.

Users can purchase SPELL on most of the largest cryptocurrency exchanges in the market, including Gemini, Coinbase Exchange, Binance or SushiSwap. The best platforms to buy and sell virtual currencies would depend on the jurisdiction in which you are located and on your needs.

Both Binance and Coinbase have large liquidity for investors and would be offering some of the best cryptocurrency trading services in the market. Gemini could work as an alternative to these two crypto exchanges. Some platforms are also letting you purchase SPELL using local fiat currencies such as the USD or stablecoins like USDT.

Where Can I Buy Magic Internet Money (MIM)?